Over the last few months, George had a few episodes of his ear "feeling plugged," which he disregarded since it seemed to resolve on its own. He didn't think much of it until one day he had a bout of dizziness along with the plugged sensation in his ear, and then he became concerned.

George's wife took him to the local emergency department, where he described dizziness, hearing loss, and ear pressure to the doctor. Tests were performed, and conditions like stroke and heart attack were ruled out. Medications were prescribed to help George feel better, and ultimately the symptoms resolved. He was referred to his primary care doctor for further evaluation. 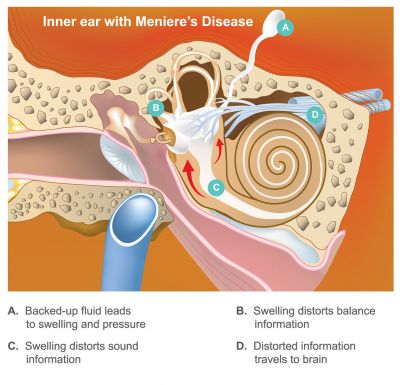 George was eventually diagnosed with Meniere's disease, an inner ear problem that occurs as episodes or "attacks" of vertigo, fluctuating hearing loss, and ear symptoms such as fullness or tinnitus. The attacks are unpredictable and spontaneous.

Tinnitus: ringing or other noises in one or both ears

Vertigo: a spinning or movement sensation

A Meniere’s attack can last from 20 minutes to 12 hours, and each one can be separated by weeks, months, or even years.

Some people have one episode only, while others will suffer 6-10 episodes per year over many years, even decades. Progressive hearing loss and a decline in quality of life can occur.

Before and After a Meniere's Attack

Many describe warning signals of an upcoming Meniere's attack, called an aura, which could include sound sensitivity, hearing loss, unsteadiness, or an increase in tinnitus. Fatigue is a common complaint afterward.

Symptoms could fully resolve between Meniere's attacks, but a progressive hearing loss could occur. Likewise, balance disturbances and dizziness can remain between attacks.

Physical therapy cannot prevent or treat a Meniere's attack, but it can address the balance issue or dizziness that remains after the attack. This is where FYZICAL - Forest Grove can help.

Meniere's disease is not entirely understood, but one theory points to increased pressure from the fluid in the inner ear called the endolymph.

Although not direct causes, triggers such as increased stress, fatigue, other illnesses, pressure changes, certain foods, and a salty diet have been reported.

No single test exists to confirm a diagnosis of Meniere's disease, but testing can rule out other causes of your symptoms.

Your doctor may use this guideline published in 2020 to help support a Meniere's disease diagnosis:

Conservative treatment is based on three approaches.

1. Managing the symptoms during an attack. This can include medications to control nausea, dizziness, and anxiety.

2. Reducing the frequency or severity of episodes. A low sodium diet and medications to reduce excess fluid are considered. Some people will also try to manage triggers.

3. Addressing symptoms in between attacks such as any remaining unsteadiness and dizziness. Again, FYZICAL - Forest Grove can help you with this. Remember that physical therapy cannot prevent, reduce the frequency of, or treat the attacks themselves.

Invasive and surgical techniques can be employed when conservative treatment doesn't work. In one such technique a medication called gentamicin is injected into the inner ear. This will destroy certain tissue in the inner ear on purpose, converting the fluctuating, unpredictable nature of Meniere's into one that is more stable and treatable. Physical therapy is also utilized after this procedure.

Other invasive and surgical techniques have limited success, including steroid injections into the ear, a low-pressure pulse generator, and surgical attempts to relieve the pressure. Meniere’s disease can be a difficult condition but treatment and management techniques are available.

Beth Jennings is a freelance writer and physical therapist.

Disclaimer This blog is provided for informational purposes only. The content is not intended to be a substitute for professional medical advice, diagnosis, or treatment. Always seek the advice of your physician or another qualified healthcare provider with any questions you may have regarding a medical condition.